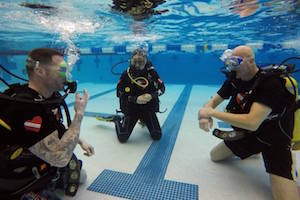 “The weightlessness kind of helps my body release itself,” Cozzie said. “I can feel it when I get out of the water.” 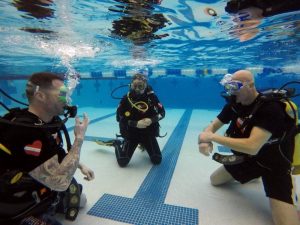 Both feel pain relief and stress relief from the high-skill water activity that also gives them connections with other veterans that are so intrinsic in the military and so sorely lacking in the civilian world.

“It’s the camaraderie,” Cozzie said. “That’s the thing I find most veterans miss.”

Cozzie, who works as outreach coordinator at the Aurora Vet Center, has gone diving five times, and Williams, of Warrenville, has been diving for five years. But both get to help newbies such as Army veteran Matt Woodin of Plano, even as they experience the benefits of scuba themselves. That’s what keeps Williams coming back.

“It’s just the people, really,” Williams said. “People that have a true love for the sport.”

Such is the beauty of the Diveheart SCUBA Experience, which takes small groups of up to six people with disabilities at a time for two-hour excursions in pools at recreation centers, universities and hotels, said Jim Elliott, Diveheart’s founder and president.