Magazine of the College of DuPage (COD)

IN THIS ISSUE
From COD to CEO — Page 3
Jim Elliott’s Diveheart inspires adaptive divers to focus on abilities, not disabilities.

The stereotypical college-to-career story goes like this:
Go to school.
Earn your degree in a particular field.
Go to work in that field.

But sometimes, even the most remote collegiate experience can make an unexpected impact long after the student has left the classroom.

Yes, you read that correctly: Diveheart helps people who’ve lost limbs; people who suffer from chronic pain; people with cerebral palsy, traumatic brain injuries, autism and other conditions by getting them into the water and breathing oxygen from tanks on their backs.

And yes, this is all headquartered in the flatlands of Chicagoland.

The Diveheart seed was planted when Elliott’s daughter Erin was born blind in 1980. Elliott and his 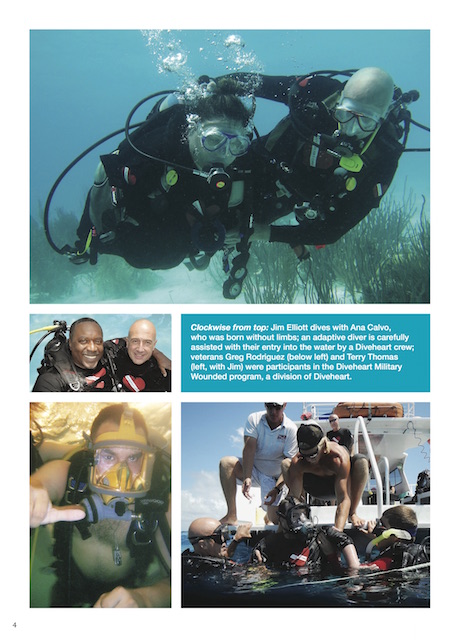 Elliott studied journalism at COD. After earning his associate degree, he earned a bachelor’s in sports writing from Northern Illinois University.

But a funny thing happened on the way to the press box. An entrepreneur since he
started caddying at Riverside Golf Club at age 12, Elliott quickly moved from sports writing to advertising sales.

He remained in the media business for two decades, working as an advertising executive for the Chicago Tribune Media Group, WGN and CLTV.

Then, despite his annual six-figure salary, he quit. Instead of selling space and time, he founded a nonprofit organization—one that has since helped thousands of people with disabilities in Illinois and around the world.

And it all started not with a journalism class—but a scuba diving class—at College of DuPage.

Elliott, now 61, is the founder of the Diveheart Foundation (www.diveheart.org). Established in Downers Grove in 2001, this non-profit 501(c)3 organization set out to “build confidence and independence and self esteem in children, adults [including military veterans] with disabilities through scuba diving.”