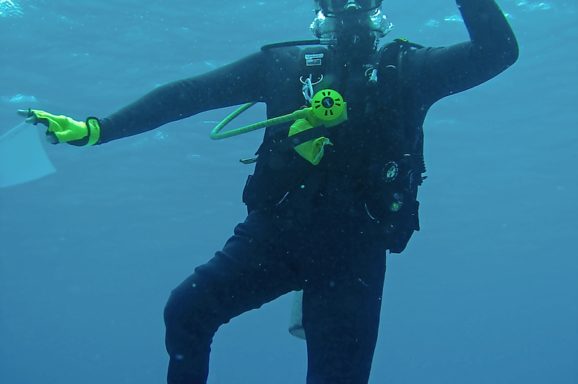 Bill Bogdan cannot remember a time when he wasn’t in a wheelchair. The Mokena resident suffered neuroblastoma of the spine (a form of cancer that occurs most often in infants and young children) when he was eight months old, which left him a paraplegic with limited movement in his legs. Today, at the age of 48, he escapes that reality only when he steps into the weightless environment of a pool, lake or ocean.

“It’s the only place I can go where I don’t need my wheelchair,” says Bogdan, who revels in the freedom of movement provided when he is scuba diving.

Bogdan is a board member of Downers Grove–based Diveheart, a nonprofit dedicated to building confidence, independence and self-esteem in the lives of children, adults and veterans with disabilities through scuba diving, scuba therapy and related activities.

Diveheart was founded in 2001 by Jim Elliott, who was motivated to find new challenges and experiences for his loved ones who were living with disabilities. His father was a disabled Vietnam War veteran and his oldest daughter Erin was born blind. After teaching his daughter to downhill ski, he thought scuba diving could potentially assist people with disabilities, both physical and cognitive, to have adventures and develop their can-do spirits.

“I thought if skiing can help people, I can only imagine how scuba diving would help,” he says.

People who struggle to move on land move more freely in the forgiving environment of the water where they can—sometimes for the first time—escape the confines of gravity.

“It’s the closest thing on earth to being in outer space. We call it inner space,” Elliott says.

Diveheart focuses on helping people take advantage of their assets, such as upper body strength or superior sight, to navigate in the water.

“We cater to their abilities, not their disabilities,” Elliott says.

The organization offers adaptive scuba experience programs for people with disabilities all over the world and has dedicated U.S. Diveheart teams in the Chicago area, Florida, Atlanta, Southern California, Dallas and Washington, D.C.  The organization also trains “buddies,” who accompany participants in the water.

“Dive buddies learn to improve their skills and gain empathy as well,” Elliott says. “We run them through scenarios where they are working with a blind person, a paraplegic, a quadriplegic or an amputee. We teach them situational awareness and to always keep their eye on the adaptive diver and respond to [his or her] needs immediately.”

At a recent training session at the DoubleTree Suites in Downers Grove, Bodgan watched his 14-year-old daughter Hannah learn about scuba diving in preparation for a vacation. The family is planning to participate in a scuba diving trip—one of four the nonprofit is sponsoring in 2018—to Cozumel, Mexico, later this year.

“I want to get her involved in scuba diving,” says Bogdan. “My passion for scuba diving is going to be turned into a family trip.”

Diveheart can help cover some of the costs for people with disabilities who participate in the trips, through grants or by helping them raise funds.

“I liked floating on my back and looking up at the water above me,” she says.

At the same time, Naperville resident Kevin Kovach was in the pool, learning how to become a scuba diving buddy for his 18-year-old daughter Katrina.

“I’m learning the skills to dive with my daughter, who has special needs,” Kovach says.

Bogdan often encourages other people with disabilities to try scuba diving or any other activity that sparks their interest.

“I always encourage people to find a passion,” he says. “Scuba has opened the world to me. It’s given me the attitude that if I can scuba dive, I can do anything.”