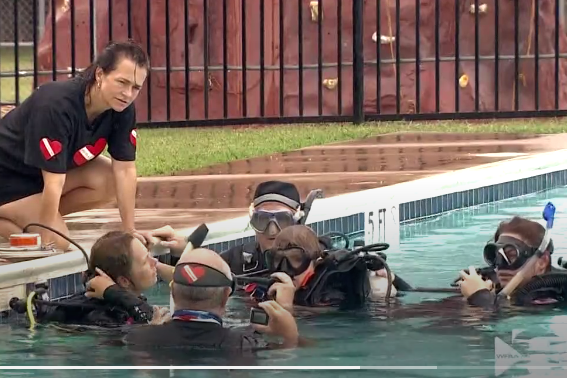 “You don’t know that you can’t do it until you try it and you find out that you can,” said a paralyzed veteran learning to dive again thanks to a new adaptive diving program in North Texas.

FORT WORTH, Texas – There was a steady downpour for several hours straight, but standing poolside at the Longhorn Activity Center in Fort Worth, it was clear — raindrops didn’t matter.

Neither did wheelchairs or different ways of thinking.

Whatever was happening above the surface was forgotten below it, because the underwater world is the great equalizer.

“You’re not attached to a chair,” said 58-year-old Laura Jeanne, a diver who is paralyzed from the chest down. “You can move without having wheels on your butt.”

The water is calming, welcoming and non-judgmental. And once Jeanne enters the place where opportunity replaces obstacles, she doesn’t dwell on the horseback riding accident she had nine years ago that changed her life forever.

Fellow diver Jacob Redford, 17, doesn’t dwell on the cognitive disorder that makes him different from his friends. “It feels like I’m in an environment that’s peaceful and I know what I can do,” Jacob said.

He was born with agenesis of the corpus callosum, a birth defect that left the middle section of his brain undeveloped. “So long as the person with a disability has the cognitive ability to understand never hold your breath, they don’t have a seizure disorder, and the doctor signs off on them, then we can take them under water,” said Dale Davis, a scuba instructor with Diveheart.

Diveheart is a worldwide non-profit. Davis and Kari-Ann Melendez expanded it to North Texas in 2018. The two navy veterans and former air traffic controllers love to dive and saw a need for adaptive diving options in the region.

Davis said potential divers are often surprised to learn adaptive diving exists. “I had one young man, 15 years old, who looked at his chair and looked at me like I was crazy,” he said.

Kari-Ann said, “Now they can feel confidence and have the self-esteem to get out there and try things that they didn’t know they could do, and I bet you they can do a great job at.”

Skilled divers accompany each new diver in the water, where Laura feels more like her old self – the one who, in her early 20s, broke down gender barriers as one of the first female Blackhawk pilots in the U.S. Army — the one who flew in Desert Storm.

The one who assumed her diving days were behind her, but through Diveheart has discovered that diving isn’t a part of who she used to be. It’s who she can be. “You don’t know that you can’t do it until you try it and you find out that you can,” Laura said. “Never say never. Life isn’t over. It’s just different.”

Becoming fearless inside the water and out.