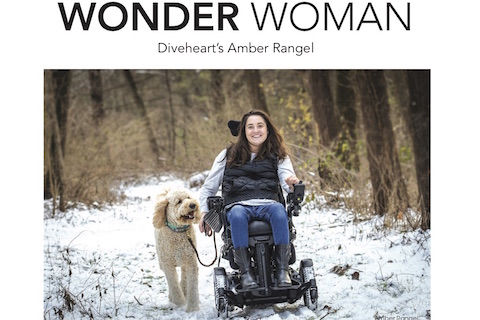 Did you know that March is actually the official birthday of Wonder Woman? According to the 1976 DC Comics Calendar, March 22 is Wonder Woman’s in-universe birthday. Wonder Woman’s first appearance was in December 1941’s All-Star Comics #8. We see many wonderful women every day, and Diveheart’s Amber Rangel’s story is one of courage and inner strength — a spirit to live life at the fullest, despite physical obstacles. This month, Diveheart goes “in-depth” with one of its success stories that inspires young and old having physical obstacles, but without limitations.

Amber found her passion for water-skiing when she was introduced to it at the age of eight. A decade of hard work later, at 19, she became a world-class barefoot skier, ranked 26th in the world among women. That year, while training for the Barefoot Water Ski national championship, an accident left Amber with a spinal-cord injury, changing the course of her life.

During intensive recovery and therapy, as a full-level quadriplegic, what once gave her such joy now terrified her; but she knew she had to get back in the water. After some searching, Amber decided to try scuba-diving. She started by getting diving instruction in the pool, and then found Diveheart, a non-profit organization that helps people with disabilities gain freedom through diving. Today, Amber is a certified adaptive scuba diver who dives around the world in locations such as Mexico, Honduras and Iceland. Working with Diveheart, her goal is to help introduce scuba therapy worldwide to others with disabilities.