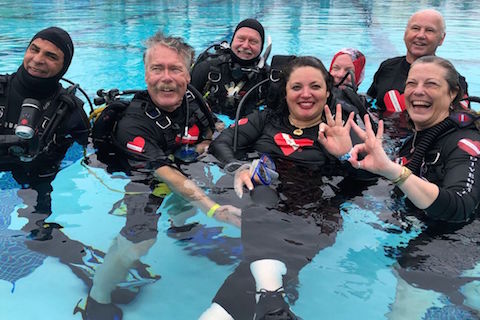 SANTA CLARITA, Calif. – You wouldn’t think the anniversary of a life-altering injury would be something to celebrate, but that’s exactly what took place at the eighth Annual Adaptive Wheelchair Sports Festival.

The event is put on every year by the Triumph Foundation, and gives athletes from across Southern California the chance to triumph over their disabilities.

This year, Pasadena resident Norma Villar took part in the festival. She celebrated the five-year anniversary of a surgery that resulted in her paralysis.

“Ever since my injury, I’ve thought let’s just experiment life, let’s explore,” she said. “And I’m doing so many things that I never did prior to my injury.”

One of those things is scuba diving. In partnership with a group called Dive Heart, Villar got the chance to go under the water — to swim for the first time in years.

“I literally felt that I wasn’t paralyzed,” Villar explained. “For however long I was underwater, I felt free. I couldn’t believe I did this.”

It’s just one of many activities she’s been involved with through Triumph. But it was not an easy road to get here.

Five years ago, Villar began experiencing symptoms like drop foot and dizziness. After a few doctors visits, she was diagnosed with a congenital defect in her spine.

Although her surgeons reassured her it would be an easy fix, several back-to-back surgeries left her an incomplete paraplegic.

“I hated myself and I hated my life. I hated everything about what happened to me,” she said.

Fast-forward five years later and you’ll meet a very different Villar. She’s excited and determined to take on new challenges, inspiring others along the way.

“What I’m doing here,” Villar said, “is showing the newly injured people that life does go on and despite our circumstances we can conquer the world still.”