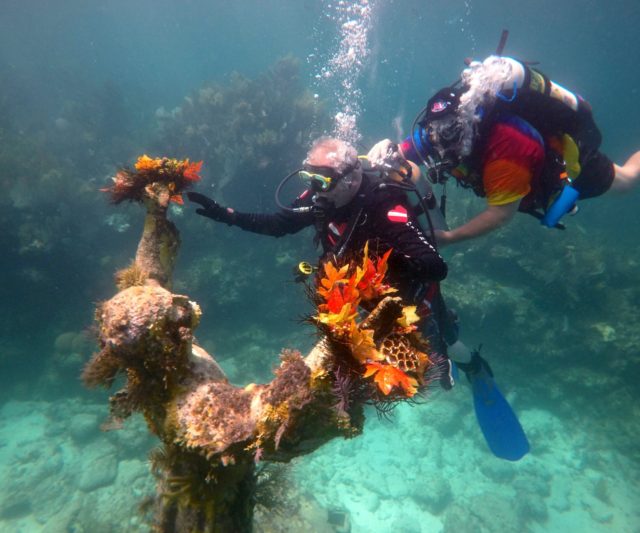 A Plunge of Faith

Half a century after enshrining a famous Italian statue of Christ beneath the waves of the Gulf of Mexico, blind diver Gabe Spataro proves himself to be a source of inspiration.

Christians hold dear the unwavering belief that Jesus reigns over all the realms of Earth: land, sky and sea. As tributes, be- lievers have reverently placed monuments around the globe, from sea level skyward, including the 125-foot-tall statue of Christ the Redeemer that tours half a mile above Rio de Janiero on Mt. Corcovado.

As for the briny deep, statues of the Lord are much harder to find. Encountering Christ beneath the waves is a rare occurrence indeed. Pursuing him through the curtain of sightlessness is rarer still. Which is what makes the story of Gabe Spataro so incredible.

A Korean War veteran now 87 years young and legally blind, Spataro paid tribute to the Christ of the Deep statue off Key Largo by diving to meet it in 2015. The journey brought him full circle, as he played the lead role in placing the statue off the coast of Florida on Aug. 25, 1965. Without him, the statue would never have found its home 20 feet underwater, where it stands today covered in fire coral, its arms still outstretched in otherworldly triumph to welcome the countless divers who come to visit.

Spataro shared with Lou&A the story behind the statue — also known as Christ of the Abyss — and his role in negotiating its long trip from Italy. 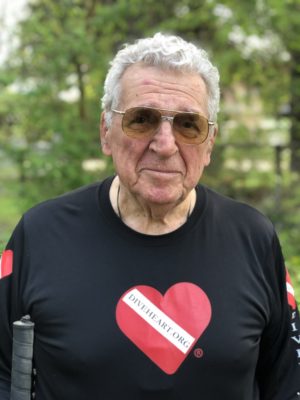 Lou&A: Tell us about your Italian roots.

Gabe Spataro: My father came here when he was 16 years old from Sicily and went to work on the railroad. In World War I, he went into the Army and came out as a corporal — he was very proud of that — and became a citizen of the U.S. My mother came here when she was three, and they settled in a Sicilian neighbor- hood in Chicago. But my father told me growing up that we were Americans, and we didn’t speak Italian in the house. And so I never did learn Italian. [Laughs.]
He had a liquor store in Chicago on Diversey and Central and went to New York in 1942 to visit a friend who was making pizza. He came back and changed the bar into Sparga’s Pizzeria. I was 12 years old when I started making pizza; I’ve lived with pizza my whole life.

Lou&A: You served in the Korean War as a supply sergeant. How did you dis- cover scuba diving when you returned?

Spataro: When I came back from Korea, my two brothers and I bought a sailboat. I became a member of Columbia Yacht Club in 1956, and we took turns: Two guys would go sailing and one would stay back and manage the restaurant. I met a couple in the restaurant, and they said they were going out on a picnic and planned to scuba dive, which I’d never heard before. So they took me to Lake Geneva. Being underwater with the fish was amazing, and I remember being down there for 30 minutes, but I had to come up for air — I didn’t know how to breathe underwater yet.

Lou&A: The story behind the statue is fascinating and connected to an Italian diver. When did you first hear of “Il Cristo degli Abissi”?

Spataro: I went on a wine-tasting tour to Genoa; it was almost a fluke. I had lunch with Guido Gelletti, who created the statue. They’d put one in a harbor when the first Italian scuba diver died in 1947, Dario Gonzatti, and they put one in Portofino. They had a third statue and said, “Gabriel, we’re giving it to you, but you’ve got to get it back to Chicago.”

Lou&A: That must not have been easy.

Spataro: It was a beautiful bronze statue, but it was 9 feet tall and in a crate that measured 16 x 16 x 4, weighing several tons. And it needed to come 7,000 miles by water to Chicago. I’d always talk to my father about my problems, and he said, “We have a friend at the American Steamship Line. Talk to him and maybe he can help you.” When my father told him about the statue, the guy asked, “How can I help you get it here?” Seven thousand miles by water to Navy Pier, and it didn’t cost a dime!

Lou&A: So how did you get it to Florida?

Spataro: I was always talking to my customers about my problems, too — and one of them was a pilot in the Air National Guard. Then on a Saturday night in December with snow coming down and me in a tuxedo from serving a banquet, I get a call from some guys who said, “There are some men at O’Hare looking for a statue in an Illinois Air National Guard hangar.” They had a plane ready to fly to Florida. So we got out there to load it up, but the plane hatch was high off the ground and on an angle.

The statue caught a corner of the hatch and almost fell. One of the men with me said, “We almost crashed with Christ.” [Laughs.]

Lou&A: It’s incredible you never got to see the statue underwater. We understand the organization Diveheart played a key role in helping you return to the state for the 50th anniversary in 2015.

Spataro: Well, here it is 50 years later, and I’d developed macular degeneration: I can’t see, I can’t read, and I can’t dive. Then I found out there were six or seven disabled guys learning to scuba dive with Diveheart. And this group is setting up a dive for us to go to Cozumel. They spent $1,000 on my equipment: the fins, the tanks, everything. It was just a fantastic trip.

After I sent the statue down to Florida in 1965, I was never contacted. So until I went with Diveheart, I’d never heard any- thing about it. It’s such a popular attraction and such a big thing in Key Largo.

Lou&A: So what was it like to be in the statue’s presence after five decades?

Spataro: It was such a nice ceremony. A priest in Key Largo wrote a beautiful prayer, and I read the litany and took a wreath down. Another diver took a second wreath. I poured holy water around it from France and couldn’t look at it the statue straight ahead. But by moving my eyes I can see peripheral things. And honestly, being by the statue gave me a warm, comfortable feeling.

Lou&A: How has this statue inspired your own faith?

Spataro: So many people were involved — how else could the statue have been put there for so many people to enjoy? Who am I? Just a simple Sicilian boy who was trying to do some good in the world. It wasn’t just all Gabriel. And I really believe it was the Lord who made this all happen. He did all the work. I was just his little guy here on the land, that’s all.