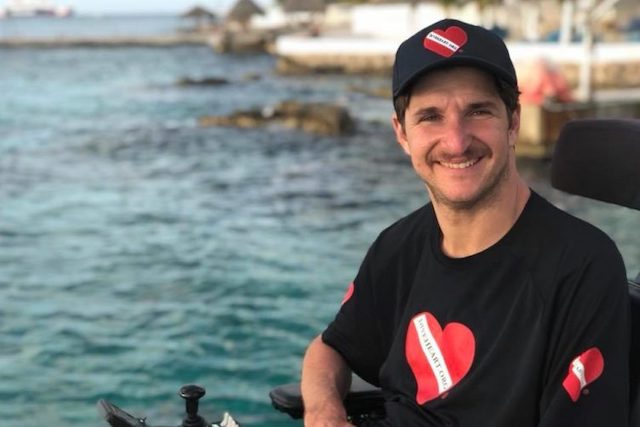 The CURE NATION blog often shares stories of people exploring their world after spinal cord injury to help encourage others on the same path to choose their own adventure too! We knew the minute we met Christopher Block, a C5 quadriplegic, at the Chicago Abilities Expo that his journey would also motivate so many people who dream of conquering the high seas. Read on below to discover how scuba diving changed Chris’ outlook on paralysis and more as he adjusted to life after spinal cord injury.

Christopher Block is 33 years old and lives in a suburb of Chicago called Highland Park. He was injured three years ago attempting a bicycle stunt in a friend’s backyard, breaking his neck at C-5. “They didn’t tell me the brakes were disabled,” he tells. “I had a helmet on but that didn’t help. I went over the ramp and head-first into the muddy bottom of the pond below.”

“I’ve been doing everything I can to get my independence back ever since.”

Chris was sent to Shirley Ryan Ability Center for rehab where he’s been working hard to get his life back. Transfers have been one of the most difficult obstacles for Chris, just as it is for most quads. He’s had four bicep-to-tricep and forearm-to-thumb tendon transfer surgeries to try to gain more strength in his arms and function in his hands.
Chris credits Shirley Ryan Ability Center with much of his recovery after SCI.

Chris credits Shirley Ryan Ability Center with much of his recovery after SCI.

“It’s the bed transfer that I’ve been working on the most,” he says. “I can get in it but getting out is almost impossible. It is impossible with a soft mattress.”
Chris Shares His Fitness Secrets as a quadriplegic

“The best two things I’ve found, in my personal opinion, since being injured to help me stay in shape is a rowing program out of Spaulding Rehab and my standing wheelchair,” Chris reports.

“The rowing machine I have is for quads and paras and uses E-stim for your legs while you row with your arms. You can really get a good workout with it and get your heart rate up. That’s not easy for quads to do,” he explains. “When I can I try to use it every other day, and I use those Active Hands gloves to keep my hands on the handles.”

“As a quad, I feel that rowing has been the best thing for getting my core muscles stronger, and the E-stim keeps my legs in better shape.”

“The other thing I use a lot is my stand-up wheelchair,” Chris continues. “I have a Permobil F5 and I try to get up for at least 45 minutes every day. The doctors told me that’s ideal for my bones. I know it helps my digestion too.”

Chris also gets on the back of a horse once a week, thanks to a program called Equestrian Connection only twenty minutes away from his house.chris enjoys horse therapy too”I basically hold on for dear life,” Chris says while laughing. “One of the therapists there just picks me up and puts me in the saddle.”

“They walk beside me the whole time though so it’s safe. It’s supposed to give your body that walking motion it’s missing, and it only costs $25/week for a half hour of riding, and they do a great job for people with all kinds of disabilities.”
DISCOVERING A WHOLE NEW WORLD Through Diveheart

“When I was inpatient at Shirley Ryan, I picked up a flyer one day about this scuba organization called Diveheart,” Chris recounts.

“There was a cute girl on the cover which caught my attention too. I actually got to know her later. Anyway, they were having an event where anyone could come try it out so I went — and I loved it! It was in a swimming pool but being in the water, I felt so comfortable and the weightlessness was amazing. I could move around with so little effort.”