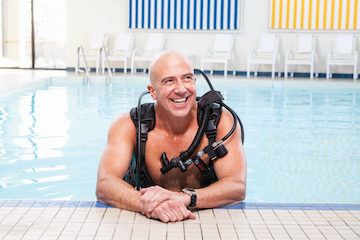 Divers call it “the big blue” —- that dark expanse you see when you’re diving underwater and facing out into the deep sea.

You might feel anxious at first, as you think about what lurks within. But then, as instructed, you start to focus on your breath. You notice the fish swimming around, the graceful movements of your own fins, the bright coral below. Before you know it, you’re focused on the here and now. Your heart race steadies and your limbs feel weightless.

For many, that’s enough of a reason to take the plunge. When people are underwater, surface distractions are eliminated, which reduces stress triggers, and the ambient pressure of the water can be soothing.

Many divers report experiencing a meditative state almost as soon as they enter the water. The slow, steady breaths required while diving calm the mind.

A 2017 report published in the journal Frontiers in Psychology noted that scuba divers experienced a marked reduction in perceived stress, similar to what’s seen when people practice meditation. A second study, released in 2017 in the journal Disability and Rehabilitation, confirmed scuba’s therapeutic benefits for military veterans. Participants reported reduced anxiety, depression and insomnia, as well as improved levels of social functioning.

It’s more than just the mental wellness aspect, too—for those with disabilities, scuba therapy can be transformative, opening new worlds below the ocean’s surface.

Paul Conroy, a scuba diver since 1992, remembers taking his wife, Gloria, to the pool after her multiple sclerosis symptoms had confined her to a wheelchair. “I’d put flotation devices on her arms, and she’d just smile and drift,” Conroy says. “The weight of her body was off her, and she was free.” When Gloria passed away five years ago, Conroy decided to get back into diving. What was once a hobby became his passion. Now a senior dive master with SCUBAdventures in Naples, Conroy recently received his certification as a dive buddy to work with people with disabilities. “I know how much it made Gloria feel alive again to be in the pool,” he says. “I want to give that feeling to other people with disabilities.”

Scuba therapy has been quietly exploding in popularity. Many of the major dive organizations, like Scuba Diving International (SDI) and the Professional Association of Diving Instructors (PADI), now have courses for those who want to work with adaptive divers. At Scuba Outfitters in Naples, PADI course director James Chandler is trained to work with divers whose disabilities include sight impairment, deafness, amputated limbs and quadriplegia. “The impairments someone might have on land aren’t the same when they’re in the water,” Chandler says. “They might not be able to do a lot of other sports like hang gliding or bike riding or mountain climbing, but they can go scuba diving.”

Advocates of scuba therapy say it can benefit everything from cerebral palsy to muscular dystrophy to autism, traumatic brain injuries and post-traumatic stress disorder. Weightlessness allows for a range of movement not possible on the surface, while physical activity underwater offers a low-impact way to work muscles.

Organizations such as Diveheart make it their mission to connect people with the restorative powers of the water. The nonprofit’s founder and president Jim Elliot has been active in helping scientists at Cornell, Duke and Northwestern universities quantify the mental and physical benefits of diving. He has also helped get more than 5,000 people with disabilities in the water.

He finds that for people with disabilities, scuba brings a range of opportunities that can boost confidence. Being able to dive and be part of the diving community makes them feel empowered. Combine that with stress reduction and a weightless world unavailable on the surface, and it’s no wonder why many divers—both with and without disabilities—use the same expression to describe their diving experiences: “Scuba is good for the soul.”

Read the article on GulfShoreLife.com